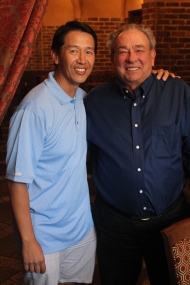 As I’ve shared many times, RC Sproul is one of my heroes in life.  I think you’ll enjoy this candid, honest, and one-of-a-kind conversation that I had with him earlier this summer.  Learn and glean from one of the world’s leading theologians over the last 4 decades, and allow his enduring passion for the Lord encourage and spur you on! Comments welcomed. – Arthur

Arthur: We are starting a summer series called, “Standing on the Shoulders of Giants” …  I wanted to do not only biographical sketches, but capture the passion and thrust and vision that you have, and had, and that God has called you to … If you could share your life and vision and what you want people to know, that would help me to be faithful to you and to what God has called you to.

RC: I would say, Arthur, understand where my theological passion comes from.  It comes from the initial days of my conversion … When I was converted, it was a Damascus Road kind of experience.  It happened to coincide with the beginning of my freshman year in college, which happened to be a church related college.  I went there not because it was church related, but because I went on [an] athletic scholarship.

I was converted the first week and then I had to go to an “Introduction to the Old Testament.”  So, I started to read the Bible for the first time, and my virginal reading of the Old Testament, particularly overwhelmed me (with emphasis) with the sense and majesty of God the Father.  I can remember walking the dormitory halls at 3 in the morning when everybody else was asleep and dealing with this portrait of God that I found in the Old Testament; and then I realized that this God plays for keeps [and] this can’t be something that’s just a matter of peripheral or surface commitment …

My next experience was in a philosophy class when I had my teacher expound an article from Augustine on creation – creation ex nihilo – and again that had a remarkable impact on my understanding of God.  Then, of course, when I went to seminary and studied under [John] Gerstner, I was exposed to the great minds of church history, particularly … Augustine, Anselm, Athanasius, Thomas Aquinas, Luther, Calvin, Edwards, and each one of these giants upon whose shoulders we stand today differs in some degree from the others – usually in small matters – nevertheless, what came across to me in all of them was that they were all intoxicated with the majesty of God the Father.  And that defined my theological thinking, I think, more than anything else …

Arthur:  You were talking about the shoulders of giants that left you in awe because they were intoxicated with God the Father.  I talked to you back in the early ’90’s … and asked you for advice for me in leading youth.  Your response to me back then was, “Teach them who God is. Teach them the character of God.” Now that you’ve had the chance to rub shoulders with the [newer guard, like Mark Driscoll] and have seen a little bit more of the youth today, would you add to that advice at all?  Or would you say we need it more than ever?

RC:  [We need it] now more than ever!  Particularly now, if anything that’s awakened me since pastoring a church, Arthur, is where this works itself out at the level of worship.  I’m afraid that the shallow way in which God is being worshipped in the evangelical world today reflects the theology that people have.  I think our worship should reflect what we believe about the nature and character of God. And when you understand who God is, you can’t be casual or cavalier in His presence.

Arthur:  The shallowness that you see … can you expand on that a little bit more?

RC: How we dress, how we sing, how we behave in church is at kind of a casual level, which doesn’t make sense to me if we understand Who it is we’re worshipping.

Arthur:  When speaking of standing on the shoulders of giants, how do you feel about being considered by many to be one of those giants today?

RC:  Well, I think that the people who think of me as a giant instead of a dwarf are the people who don’t really understand who the giants are, the people whose shoulders I’m standing on.  But I understand that in every age people are pushed into positions of leadership and it normally is the case that contemporaries pay more attention to contemporaries than to leaders from the past.  I mean that’s common human experience, and I understand that.  In fact, even when I write, every time I’ve written a book, Arthur, I have felt like whatever I’ve had to say in this book has been said so much better by people in the past than I can do now.  But I also realize that people won’t read the people from the past, and so what I’m trying to do in a sense is introduce them to those people from the past and then they’ll at some point get rid of my books and then get to reading the giants.

Arthur:  Now RC, you really believe that?  Or is that … the “right answer?”

RC:  Well, that question is a little bit insulting, Arthur, (chuckling)!  Yeah, as a matter of fact, I do believe it.  I couldn’t believe it more strongly.  I’ve said it many times and I’ve had that feeling when writing and struggling to communicate certain things. Like when I was writing on Willing to Believe, of course I’m giving a little rehearsal of what others have said, like Luther and Edwards, and I’m thinking, I wish the people would really dig into Edwards on this because he does it so much more profoundly than I did.  And I thought many times that I realize that I’m in a position of prominence, if you want to call it that; but I have often felt that if I lived in another century, where the Warfields and the Hodges, and people like that were around, people wouldn’t be paying me any attention.  I think the reason I’m in some kind of prominence today is because of the age in which we live.  I do honestly believe that and I have for years, Arthur.

Now at the same time, to get to the other side of what you were getting at, I … I was talking with a church leader recently who is prominent in his denomination and he’s 20 – 25 years younger than I am, and he asked me to do something, and I said, “Why do you want to hear from me on this point?  I’m a dinosaur now, you know,” and he was horrified that I said that, and he said, “I don’t think you realize that your influence right now is greater than it’s ever been.”  And I was not just surprised but I was shocked he said that.  I thought, hmmm, maybe he’s right.  When you think about all the things that Ligonier does to expand the outreach of the ministry, and the way it’s gone overseas, and the way radio has multiplied.  You know, the guy may be right, but I may be just kind of feeling my age.  Does that make sense to you?

Arthur:  Yeah, totally.  Hey, have you been on the internet yet?

RC: What do you mean have I been on the internet?

Arthur:  I was watching you tell Mark Driscoll (a couple of years ago) that you haven’t been on the internet.

RC:  Well, since I have my iphone, I guess it counts.  Like if someone asks me a question about who starred in a movie in 1946, and I don’t know the answer, I have this app that says, “google,” and I go google that question, and so, I know this may sound stupid, but I understand that that’s kind of like being on the internet, right?

RC: I still don’t have a computer. (laughing)

Arthur: So, you don’t spend too much time on http://www.ligonier.org?

RC: You want me to tell you something?  Are you standing up or sitting down?

Arthur: Is that right?

Arthur: Let me tell you, they’ve done a tremendous job [with the site]

Arthur:  Now is that intentional to keep your clarity?

RC:  I really haven’t given five minutes thought to it.  I’m just not into that kind of stuff, you know?  I was on the radio for at least five years before I ever heard a broadcast of Renewing Your Mind, Arthur.  I don’t read my own books.  I don’t listen to my own messages.  Is that unusual?

Arthur:  No, I don’t think so.  I figure that once you hear yourself a couple of times to evaluate yourself, that would’ve done it.  Yeah, I wouldn’t want to hear myself either if I already know what I said.

RC:  Yeah, well, I tell you this.  The other side of that is that sometimes when I have listened to my program, I’ve gotten very engaged in it, listening very carefully, and enjoying it, and liking what the guy is saying, forgetting that it’s me! (laughing heartily)

Arthur: (also laughing heartily) Haha, that is so good!  I’ve done the same thing when I’m listening to a message that I did, and then I say, “Man, that’s good!”  Then Sandra walks by and she kind of gives me that look!

Arthur:  When you had your conversion, you took your classes, and you were so voracious.  You said before that you read the Bible in like two weeks or something, and then you’ve taught it to so many, you’ve taught Dust to Glory, you’ve written seventy plus books and all that.  When you come to it today, is it still your food?  Are you still fresh?  Is it still alive to you?  Does it still make RC Sproul come alive?

RC:  Oh, absolutely.  You mention today?  You know I always preach without notes, so as soon as I’m done with one lecture, I immerse myself in the next one, and I worry about, am I going to do justice to the text next time, and so that never stops, absolutely never stops.