Sadly, one of the most important questions of our times is, “What does it mean to be human?”  Only a generation or two ago, that question wasn’t so difficult to answer. However, with the current mass-level assault on the uniqueness and specialness of humanity, transcendent moral values, and the Creator Himself, the broad waters are certainly murkier than they’ve ever been.  The Enemy is at work.

In our continuing series, The Pernicious Lie, Robert helps clarify some of the smoke screen and enables us to see the real issues at hand.  Your comments are welcomed! – Arthur 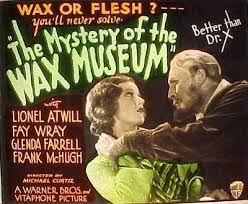 “That’s not Hercules,” Kathy said, “That looks like Tarzan in the jungle!” In the Hollywood Wax Museum there were some figures that made us wonder if they had been molded by the latest laser technology, then there were those that were authentically… fake. You could almost imagine wax dripping from what was supposed to be the face of Jackie Chan. Some statues were beyond our recognition because we didn’t know the real people they were representing—does that really look like John Wayne? I’ve never watched his movies. However realistic those images were, they could only capture a physical appearance. Though we were surprised every once in a while, not one of the wax figures stepped out of its display to greet us. A wax museum is not the place to make new friends.

While you can’t (or shouldn’t) be friends with a wax statue, you share more in common with it than you might realize. It stands as a representation of something greater than itself, its substance was molded and shaped to look the way it does now, and it rarely does its job well. We too are image bearers. We were made in the “image of God” (Gen. 1:27), to represent not a physical appearance but the character of God. That image has been marred by sin so that it is hardly recognizable in us.  I look at God’s holiness, his love, his faithfulness, his patience, and I see how often my life stands in testimony to the exact opposite characteristics. When I get impatient with my mom, or when I selfishly judge others to stroke my own pride, I’m vandalizing the image of God in me.

Praise God that there was one who came as the “image of the invisible God” (Col. 1:15), the “exact imprint of His nature” (Heb. 1:3), our perfect “high priest… who in every respect has been tempted as we are, yet without sin” (Heb. 4:14-15)—Jesus. He did the impossible for us by taking the penalty for our sins and by being the perfect representation of His Father. As Christians, we have been buried with him in baptism and we have been raised with Christ in newness of life (Rom. 6:4). Now we have the double duty of representing not only our Heavenly Father but also His Son (Rom. 8:29)! God commands us to be “living sacrifices,” who fight to not be “conformed to this world” and to represent Him well by being “transformed by the renewal of [our] minds” (Rom. 12:1-2).

You see, there’s an important difference between you and our waxy friend in the museum. You are a living, breathing, moving image! A statue’s representation is only skin deep, while your imitation of Christ reaches to your actions, your thoughts, and your affections. You have much more power to represent something well—the catch is that this ability is a double-edged sword. Here’s the ugly side: the world is also trying to mold you into its image. We can become so good at looking like the world, sounding like the world, and even smelling like the world without even trying.

There is a war going on: “For we do not wrestle against flesh and blood, but…against the spiritual forces of evil in the heavenly places” (Eph. 6:24). That is why Paul exhorts us to continually put off what is earthly in us and to put on Christ (Col. 3). Our flesh, the devil, and the world are doing all that they can to shape us into their image. The only way to battle that is by fixing our eyes on Jesus and clinging to His Word. The Psalmist says, “How can a young man keep his way pure? By guarding it according to your word… I have stored up your word in my heart, that I might not sin against you” (Ps. 119:9, 11). Only through God’s Word will fulfill our mission as “His workmanship” (Eph. 2:10).

One question I like to ask to my close friends is: “What was the hardest thing that happened to you this week?” I realized the importance of the answer to this question when one friend answered, “Nothing hard happened this week.” That same week I had been wrestling with discontent and restlessness in my heart. That struggle was hard, but it pushed me to depend on God. I realize now that, while struggling with my old nature is not fun, it’s better than the alternative because there’s a war going on. If I’m not struggling with sin in my life, then either 1) I’m dead, 2) I’ve become numb to the battle for my soul, or 3) I’ve given up and given in. But we must not give in, for our momentary struggle here on earth is “preparing for us an eternal weight of glory beyond all comparison” (2 Cor. 7:17)—the privilege of being a pure picture of our Lord Jesus in heaven.