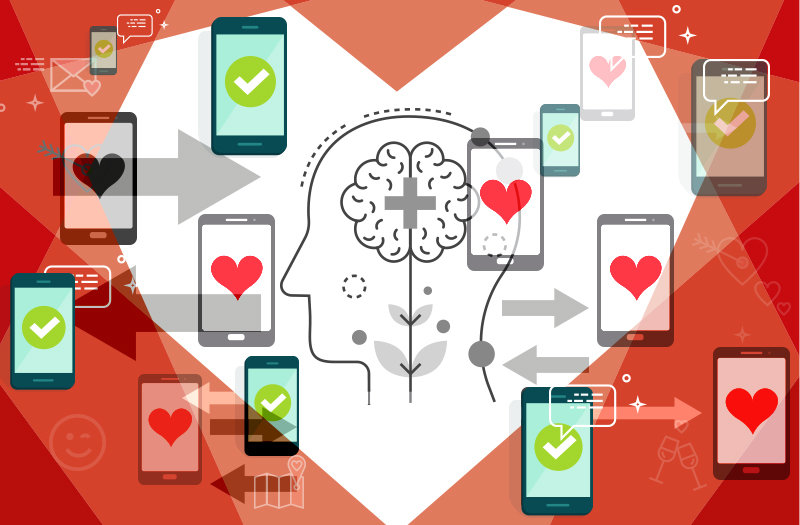 I read this article by USC Dornsife’s Susan Bell and thought it an interesting topic of discussion.  It’s not an article written from a Christian perspective, but I think brings up some good points to think through, pray about, and discuss.

This would be great to discuss with your small group members and leaders on several levels!

For better or worse: Looking for love in the internet age

Online dating and social media have revolutionized how we look for love. USC Dornsife’s Julie Albright reveals how this digital technology has far-reaching effects on our health and well-being. [4 ¾ min read]

By creating a seemingly endless choice of romantic partners for its users, online dating apps have facilitated a “hook-up” culture that’s not conducive to settling down and is driving loneliness, anxiety and depression. (Composite: Letty Avila. Image source: iStock.)

When online dating began, there was no swiping left or right, no photo-shopped selfies or alluring videos, just lonely singles pouring out their hearts in internet chat rooms.

Initially, there was a certain shame attached to online dating, Julie Albright says. “But people were really opening up and talking about things, maybe for the first time. It was all about getting to know the inner person, and many people felt like they’d met their soul mate.”

The original stigma may have gone as online dating went mainstream with the dawn of the mobile internet era, but Albright, a lecturer in psychology at USC Dornsife College of Letters, Arts and Sciences, says everything else has changed, too, as the app economy commodified people and relationships into something far more superficial.

Online dating is now the second or third most common way — depending on age — for Americans to meet romantic partners. In Albright’s upcoming book, Left to Their Own Devices: How Digital Natives are Reshaping the American Dream (Prometheus Books, 2019), she describes how it has altered the landscape of love and romance in the 21st century and reveals how the ways we now look for love are affecting our relationships, our health and our well-being — even the very fabric of society.

Online dating creates the idea that there are thousands of romantic possibilities available to us. However, that brings problems of its own, Albright warns, because when faced with a vast array of choices, paradoxically, we’re unable to choose.

“We keep thinking there are endless choices, that maybe someone better will come along,” she said. “But at the end of the day, people who don’t choose are going to end up lonely because they’re not in a relationship. You have to choose and you have to commit to build something.”

But by facilitating a “hookup” culture, dating apps have created an environment that’s not conducive to settling down.

Dating has become a sport, Albright argues, rather than a means to build a long-term relationship.

“You couldn’t talk to 300 women in a night in a bar, but with a dating app, you can throw out a thousand hooks and get 300 bites.”

Traditions like marriage or buying a home, she says, provide a guiding north star by which people can navigate their lives. Now, young digital natives, hyper-attached to digital technologies and no longer choosing commitment and marriage, are unhooking from traditional social structures and are cast adrift — a process Albright calls “coming untethered.”

“Taking the endgame out of courtship changes the dynamic of what dating is about. If you’re just dating in a constant churn, there’s no future and no hope on the horizon,” she said. “Instead, it becomes all about experience.”

The result, Albright argues, is that people find themselves lonely or anxious without knowing why.

“You would think we’re more connected than ever,” Albright says, “yet paradoxically, as we become increasingly enraptured and mesmerized by our devices, we’re separating from one another.”

A warped sense of self

Noting that we develop our sense of self through the reflected appraisal of others, Albright warns that people are drifting far from their true selves in constructing their dating profiles. The end result can undermine self-esteem because others are giving validation for a self that the person knows to be false.

This “virtual mirror” is also causing anxiety and depression, Albright notes, as people feel they can never live up to the images they see, even although they’re comparing themselves to an “other” that doesn’t really exist.

Even if we know online dating is making us depressed, it’s not easy to stop, Albright argues. She compares using dating apps to playing one-armed bandits in Las Vegas. “Sometimes you win, sometimes you lose, and that’s why you keep going back for more,” she says, noting the power of random reinforcement as a behavioral driver.

And that’s not all. Dating apps and social media also fuel a narcissistic desire for attention, satisfying primitive psychological needs for attention, affirmation and validation.

“People can get very hooked on that,” Albright says.

Even if we can overcome our addiction to dating apps, abandoning them in favor of real-life encounters isn’t so easy either. Meeting in real life now makes many people nervous, Albright says, as subtle conversation and flirting skills are lost through lack of practice, causing people to feel increasingly anxious and socially awkward.

As a result, many younger people prefer texting to talking. This can translate into fewer partners as digital hyper-connectivity replaces physical relationships.

Albright does see some positive aspects to online dating.

Early indicators show that relationships started online may be more successful. Online dating and social media can help people meet someone based on common interests and values that can predict a lasting relationship. They can also enable users to meet potential partners outside their normal social sphere, leading to more interracial relationships.

Postponing marriage may mean couples are more mature and marriages later in life tend to be more stable — good news, too, for older women, who tend to be more successful dating online than younger women.

“Online dating does open up new doors for people by giving them a place to begin again,” Albright says. For older people coming out of a divorce or a long relationship, particularly, and unused to dating, it offers hope.

Avoid creating a false online persona, and take time to develop intimacy. But above all: Switch off your phone.

“Spend time together, get to know each other, look into each other’s eyes and make building that relationship a sacred space. Just make sure it’s without the intrusion of a device.”