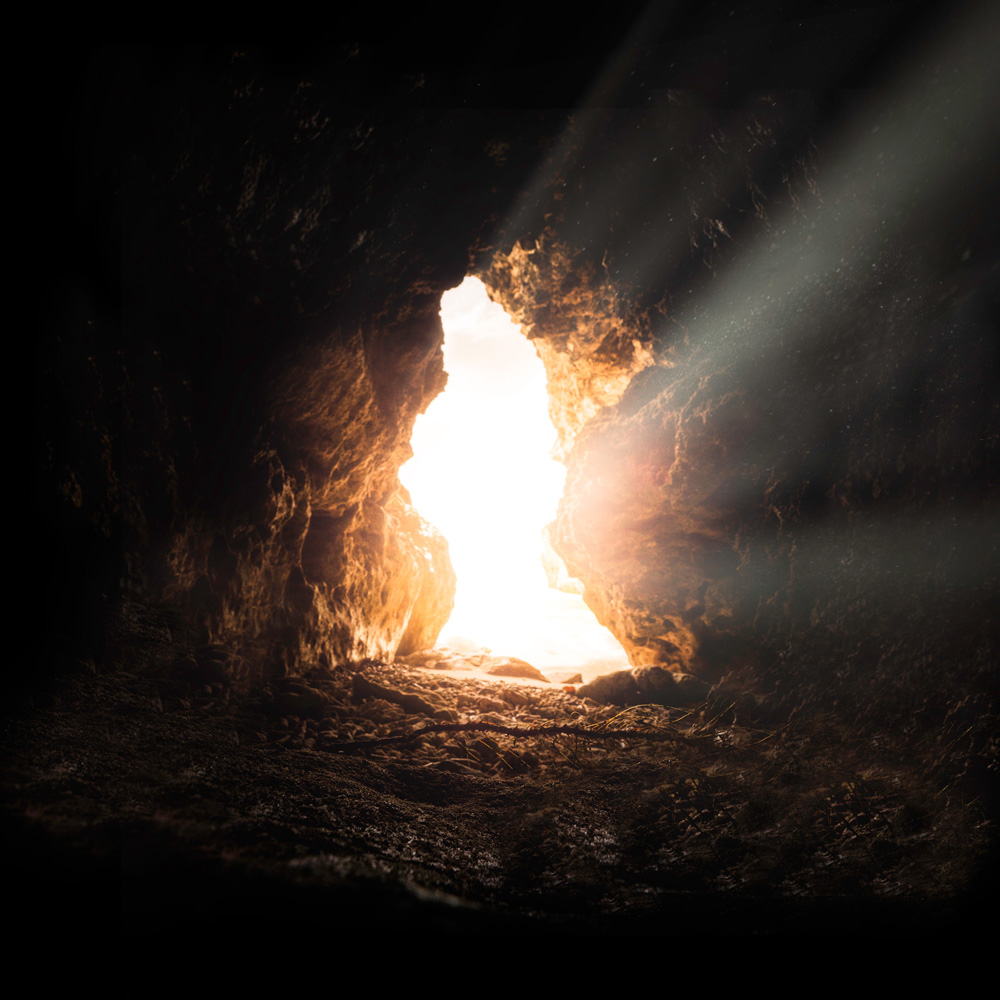 The Apostle Paul said that if Christ has not risen from the dead, we (Christ followers) are to be most pitied.  He’s absolutely right.  Jesus’ bodily resurrection makes all the difference in this world and the next. That’s Easter hope.

No More or Not Here?

An Easter Reflection from Ravi Zacharias

There is a hotel where I have stayed frequently over the last thirty years. I know many of the staff and every time I return, they give me the best and kindest hospitality. I have found that when you talk to people, you learn so much about life at different economic levels, but all with the same challenges.

One of my favorite people was a bellman called Raj. He took particular care to make sure I never violated my doctor’s orders to not lift heavy suitcases. Whenever I checked in, he would bring my bags and set them up in my room. We often talked politics and spiritual issues. He was a very intelligent gentleman and a great conversationalist. I’ll never forget his statement on politics in his country. “They are not political parties, Sir. They are cartels scheming and manipulating. We pay the price for our foolishness,” he said. Fascinating take.

Quite surprised at the phrase, I asked if he didn’t work there anymore. The reply came repeating the phrase: “No Sir. He is no more. He died last month.” I was shocked because the man was in his fifties. Evidently he had gone home one night after work, told his wife that he was not feeling well, and went to bed after a very light snack. When she tried to wake him up for breakfast, he had already breathed his last.

That phrase is pretty defining, isn’t it? The famed writer Nikos Kazantzakis, who had his run-ins with the church over his very controversial “The Last Temptation of Christ,” asked that the following words be put on his gravestone:

Very cavalier statements, except that he is not there to defend those propositions. So it is much more meant to impress the reader than tell you anything about the departed one, whether he was justified in what he said or not. And as to his state of mind after death, all of those sentiments are an ultimate category mistake. If he doesn’t exist, attributing those sentiments brings to mind what Aristotle would have said in defining “nothing”: That which rocks dream about. A rock never hopes, fears, or seeks freedom. That is for the living.

The whole message of Easter defines this longing to be. After Jesus rose from the dead, the women went to visit where they had placed the body. The angel they met did not say, “He is no more!” He said, “Why are you looking for the living among the dead? He is not here: He is risen” (Luke 24:5-6).

That statement defines everything about who we are. For the one who has given his or her life to Jesus, we will never ever “Not be!” We are meant to be in his presence eternally. The very phrase “goodbye” is a contraction of “God be with you.” It is the same with “adios”: “Go with God.”

Our hearts long for intimacy. Heaven is the consummate intimacy of the spirit. That is not a category mistake; rather, it defines the ultimate expression of life in its essence. Our spirit in communion with his. The closest thing to a touch felt by the Spirit.

The time will come when we also will have to say goodbye or adios for the last time. When that happens, how wonderful to know that those who speak for us do not have to say, “He is no more.” They can victoriously say, “He is not here; he is risen.”

The gospel message from beginning to end is dependent on this promise of Jesus that he would rise again. That unsealed tomb is the seal of his promise as the giver of eternal life. Over the centuries, skeptics have gone to ludicrous lengths to try and explain why his enemies could not present his body. That would have been all they needed to quash this rumor of his resurrection. But it wasn’t a rumor. It was a fulfilled promise seen by vast numbers, and it changed the course of history.

Luke was a physician. He knew what happened to a body when it died. He writes of the resurrection and the work of the early church. The resurrection was seen and lived out. It was the event that told the world that ultimately history is His Story of what life was meant to be.

The noted writer and atheist turned follower of Jesus A.N. Wilson said that he was at an Easter service when he saw the sham and the hollowness of his life without God. He described his conversion to atheism as “a Damascus road experience” and his return to Jesus as a slow arduous process through doubt and struggle. Part of that struggle made him see the difference of the logic that drove Hitler to his mission and Bonhoeffer to his. The belief and its consequences were worlds apart. He clearly saw the value of life in keeping with the message of Jesus and the hope and the joy of the Christian message. The faith that he once attacked, he now embraced. It all happened in a small church as he heard the message and listened to the hymns. Death was no longer to be feared, not because we are brilliant or daring or write prize-winning books as Kazantzakis did, but because Jesus lives to give us life everlasting. Even the atheist Anthony Flew granted that this was the litmus test of the Christian faith, and if true would define life.

Billy Graham tells the story of German Chancellor Konrad Adenauer looking at the ruins of war and saying to Mr. Graham, “Outside of the resurrection of Jesus Christ, I know of no other hope for mankind.”

The conversion of Saul to Paul and the skeptic Thomas showed how two of the finest thinkers of their time were willing to pay with their lives after seeing the risen Jesus. One went east and the other went west. Today, more bend their knees to Jesus than to any other name.

This same trip that began in one country for me ended in Bangkok, Thailand, two weeks later. Every day as I looked outside my window, I would look scrutinizingly across the Chao Phraya River, because it looked to me like a cemetery on the other side. So I inquired of the bellman if indeed there was a cemetery on the other side of the river. He said he thought so. I hailed a ride and went over there. The main reason was to see perchance if my dear friend Koos Fietje, who was murdered in Thailand in 1981 at the age of 38, could be buried there. Bangkok is a massive city. But I was sure the Christian burial sites would not be many. As I entered, I noticed there were gravestones going back to the 1800s. I walked through the cemetery looking in every direction. Suddenly I came upon the stone you see here in the United States. I was shocked. Koos and I were very close in our undergraduate days. He paid with his life for the gospel. The last time we met was in Bangkok in 1974. He died in 1981. This was 2019. He died at the age of 38. I was standing by his grave 38 years later. Koos served as a missionary with Overseas Missionary Fellowship. 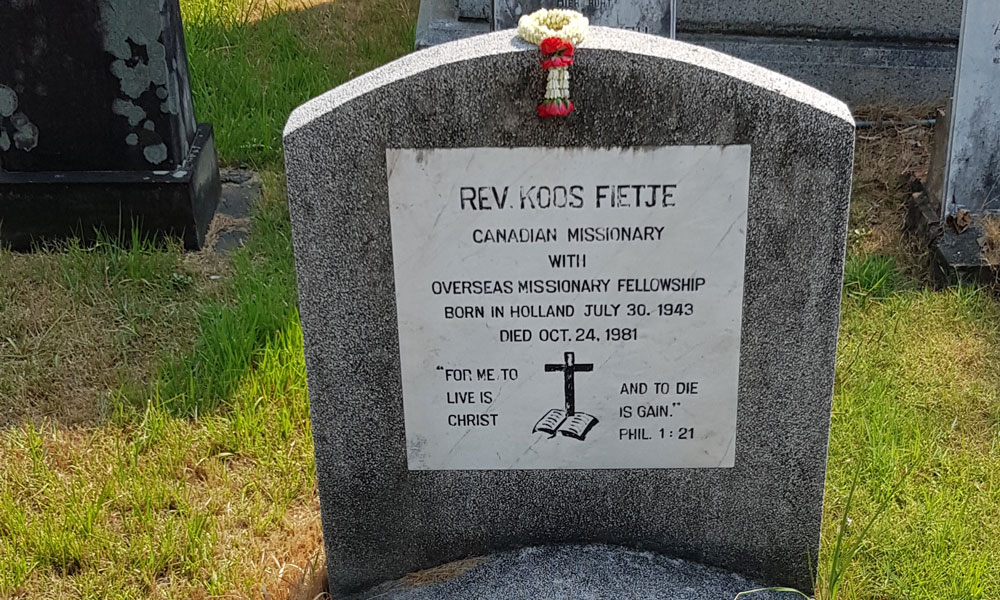 I placed some flowers at his grave and thought back on what a powerful life he had lived. Yes, there were tears.  When I went back, the bellman asked me if I found it. I showed him the picture. He looked at it and said, “What this means?” He was pointing to the verse on the stone, “For me to live is Christ but to die is gain.” I did my best to explain it to him. I saw a tear in his eye.

Two bellmen. Two weeks apart, two countries apart. Both had a tear. One because of a loss. The other because of a gain. The resurrection of Jesus makes the difference.

The hymn writer said it triumphantly:

Up from the grave He arose,
With a mighty triumph o’er His foes
He arose a Victor from the dark domain,
And he lives forever with his saints to reign.
He arose! He arose!
Hallelujah! Christ arose!

That is why the Easter greeting is not, “He is no more.” Rather it is, “He is risen!”

And the joyful reply, “He is risen indeed.”

Ravi, on behalf of all of us at RZIM