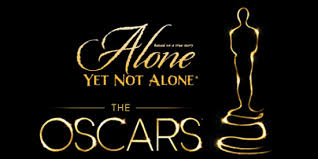 Well, in a very rare and nearly unprecedented move, the Academy rescinded the nomination for Best Song that Joni recorded, “Alone Yet Not Alone” citing campaigning that gives the “appearance of an unfair advantage.”  The song’s composer apparently “had emailed members of the branch to make them aware of his  submission during the nominations voting period.”  Now, whether that was the real reason or whether the Academy buckled to the pressure of the flak it was getting for nominating a low budget, faith-based film’s unheard of song, we may never know.  However, we do know that God got highlighted and that Joni was a faithful ambassador.

Here’s what Joni had to say about it:

During the last couple of weeks, I’ve had to occasionally pinch myself and wonder, “Is the song I recorded ‘Alone Yet Not Alone’ really up for an Oscar nomination?!” Well, it turns out that the Academy of Motion Picture Arts and Sciences just rescinded its nomination. But amidst this wild roller coaster of a ride, “I will praise [the Lord] more and more. My mouth will tell of your righteousness, of your salvation all day long” (Psalm 71:15). Aren’t you glad some things don’t change?! Like the higher plans of our wonderful, sovereign Lord :-). I am grateful that this media flurry has, no doubt, generated interest in the release of Alone yet Not Alone which will be out in theaters this June!

My Thoughts on the Oscar Decision…

While I can only imagine the disappointment of the composers of “Alone Yet Not Alone” in the rescinding of their Oscar nomination, it in no way detracts from either the song’s beauty or its message. I was humbled and honored to have been asked to sing it for the film, and was as surprised as anyone when I learned of the song’s nomination.  I am grateful for the attention the nomination brought to this worthy song and the inspirational film behind it, as well as to the ongoing work of Joni and Friends to people affected by disabilities. The decision by the Academy to rescind the nomination may well bring even further attention, and I only hope it helps to further extend the message and impact of the song.

Regarding the reasons for the nomination being rescinded, it is not my place to speculate as I have no insights into the workings of the entertainment industry.  If it were for reasons connected with the faith-based message of this film, we shouldn’t be surprised that Hollywood shuns Christ and His message.  He was shunned by weightier adversaries than those in the field of entertainment.  I was honored to be invited to sing the song and it will always be a treasured experience!